Let’s All Do More For Racial Justice In America 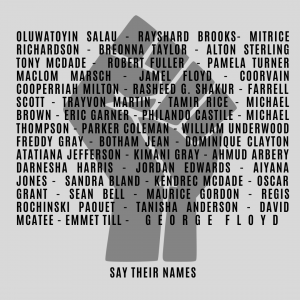 “With malice towards none; with charity for all;

with firmness in the right, as God gives us to see the right,

let us strive on to finish the work we are in; to bind up the nation’s wounds;…

to do all which may achieve and cherish a just, and a lasting peace among ourselves, and with all nations.”  – President Abraham Lincoln at his second inaugural speech on March 4, 1865. 41 days later he would be slain by a white supremacist.

In the aftermath of George Floyd’s brutal murder by police, America finds itself deeper in the conversation of our racial injustice than ever in my lifetime. Let us endeavor to leverage this moment to achieve a just and lasting peace among ourselves.

The eruption of protests around the brutal state-financed murder of George Floyd has me questioning my actions and has me challenging myself to do more for racial justice in America.

I have always considered myself anti-racist, and while I have tried to coax along my fellow white folks, it hasn’t been enough. (In 2006, working with roughly 100 others in a local division of a giant financial services company, I suggested to management – all white, of course – that they really should have more than one black person in a workplace of that size. I literally got back nothing more than blank stares. It wasn’t enough.)

In the buildup to our first Cannabis Public Policy Conference, someone suggested social equity as a breakout session and I thought it was a great idea! And we actually had two sessions. But it wasn’t enough.

I’ll never forget sitting at John Bailey’s Colorado Black Roundtable event in February. I may have been the only white person not running for office in the room. I could feel myself shrinking in my seat as John slowly read out a “list of actions that can get a black man killed in America.”

Running away from the police

Running toward the police

Putting your hands in your pocket

Pulling your hands out of your pocket

He kept going and going. I could feel the tears welling up in my eyes. Why is America, the land that I love, so steeped in racial indifference and hatred? Why why why why why? And that question does no good, there’s no resolution or satisfaction in simply asking why.

Standing by a broken down car

Standing on a street corner

Walking down the street

I’m no expert on racially motivated murders. Many of you can cite far more cases than I can. But I kept thinking of Eric Garner, a name all of us should know. Eric was a black man in New York (Long Island I believe) who was selling individual cigarettes, or “loosies,” when police approached him and put him in a choke hold where he famously begged for his life – “I can’t breathe” – before being killed by police.

As John kept going, I kept waiting for “selling cigarettes” or “selling loosies.”

Whistling at a white girl

Talking back to their boss

Eventually the list would get to selling loosies, and mercifully, it ended shortly thereafter. I managed to make it through without breaking down in tears of racial shame. It wasn’t easy.

And I don’t share this story for your pity or for warm affection. I do at least recognize my position of privilege in this country. I share this for other white people. Perhaps you are where I was. Perhaps you feel like you’re not the problem. You don’t lynch black people. You never passed over a black candidate for a job. (Or would you qualify that and say you never passed over a qualified candidate, and it just so happens you’ve never had (what you perceived as) a qualified black job applicant?)

But that isn’t enough.

The next Cannabis Public Policy Conference, September 23-24 here in Colorado, will once again explore the issue of Social Equity in cannabis.

(You can see the report from the first conference here.)

It isn’t much, a breakout session at a conference. It will be whatever we make it out to be.

I promise to make it one of, if not the, biggest and most important sessions at the Cannabis Public Policy Conference on September 23-24. But I can’t do it alone.

We need your help. The cannabis industry needs your wisdom and experience. America needs us to make itself better. Lives literally hang in the balance, and if that expression is racially insensitive, I apologize.

There is a golden opportunity here to leverage the cannabis industry for a sliver of racial justice to oppressed communities. Cannabis has the right mixture of new – policies are still forming around cannabis – and applicable – communities of color were disproportionately targeted by the War on Drugs.

Let’s seize this moment to craft some victories for racial justice. Join us, this discussion is your discussion. Let’s all collaborate to create some wins for historically oppressed communities. Let’s collaborate for progress. America is an imperfect union. It will never be perfect. But the more you and I work at it, the better she gets!

Ta’Nahisi Coates makes a very elegant case for reparations. He is one of the greatest writers of our time.

There’s plenty we can do. Pick one or 10 from this list and then do it.

Here’s a data tracker demonstrating how COVID-19 is literally killing blacks at roughly 2X the rate as whites. Unacceptable!!

Most black people running are just jogging like you or me. They just have to approach it completely differently. Confront your fears America!

You have Successfully Subscribed!